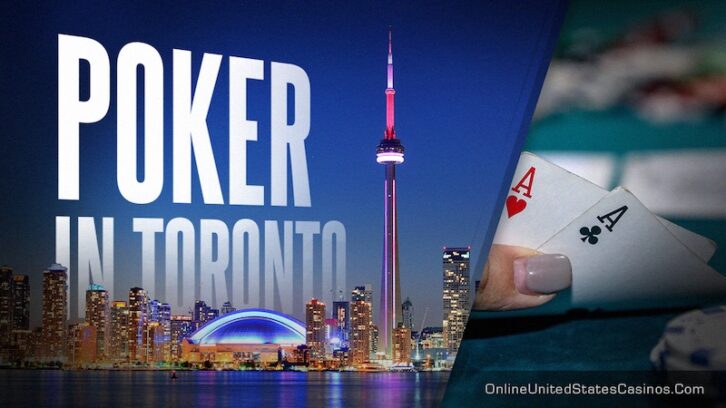 Where to Play Poker in Toronto

Poker has made a comeback, or so they say. The world’s most popular card game, which peaked in popularity around the early to mid-2000s, is again returning to the limelight thanks to the ongoing global pandemic. According to most, poker entered the mainstream in 2003 when the World Poker Tour debuted its inaugural season on the Travel Channel. However, post-2006, due to the passing of the Unlawful Internet Gambling Enforcement Act in the US, interest in playing cards, in general, significantly dropped off. Now, it is allegedly coming back. Toronto-based The Stars Group, the owner of Full Tilt Poker, and PokerStars, part of the conglomerate Flutter Entertainment, announced that they saw a 27% increase in activity in the first quarter of 2020 when the initial series of lockdowns hit. Per official data, they have maintained a decent level of profitability, card-wise, throughout these past two years, showing that interest in the game is not fleeting.

As a rule of thumb, people love poker because it is easy to learn and is mentally challenging, requiring strategy and knowledge of human behaviour. It is a game of skill, as expertise guarantees better payouts. Thankfully, poker is legal in Ontario, widely available in many of the province’s card rooms. Moreover, home games are also allowed in the Great White North, as long as the host is not profiting from organizing such betting fun. Naturally, Torontonians also have the option of enjoying online Texas Holdem at offshore sites. That said, for authentic card action, they can visit one of the following venues in and around the greater Toronto area.

Located on 24 Mallard Road in North York, near the 404 and DVP, the Toronto Poker Tournament Series is a popping spot for card gambling fun. The club moved to this location in June 2020, and it now features a 3,000 square foot floor, six tables, four washrooms, an outdoor rooftop deck, a lounge area, a kitchen, and tons of parking space. They claim that they offer the best and most massive tournaments in Toronto, mainly sticking to $1/3 No Limit Holdem games. Doors here open at 7 PM on weekdays and 3 PM on weekends, and they close at 4 AM. There is even a TPTS Player app anyone can install on their phone. It provides tournament registration, live contest clocks, club announcements, and the ability for anyone to join a cash waitlist via a click.

The Toronto Poker Syndicate is a terrific place for passionate poker enthusiasts residing in Scarborough, planted at 1200 Kennedy Road. It is a private club specializing in No-Limit Texas Holdem. That said, it also frequently runs 2/2 Pot Limit Omaha tournaments and games. The Holdem ones here are usually 1/3 and 2/5 ones. The Syndicate is open every day of the week from 7 PM to 6 AM. It is a safe gambling environment at an accessible location that treats its players fairly. The locale also offers pool, foosball, and PlayStation fun free of charge, and its overall customer service is at a super high level.

The Aces Club, now Player’s Inc, is an established locale successfully operating for over a decade, boasting an impeccable reputation among locals. During its lifetime, the club has remained at 63 Mack Avenue, #13, in Scarborough, and it has continuously focused on Omaha games. Note that the Aces Poker Club does not take a rake from any game pot but instead has a one-time admin fee of $10-$15 and rebuys at $5-$10. The only rake that gets charged here is for promotions such as bad beats, freerolls, high hands, kickback draws, and others. Please note that this is somewhat of a more modest place than the other two listed above. Nevertheless, it is a comfy spot with a friendly environment and free food and beverage service. Tipping dealers is a requirement at the Aces Club on won pots, as that is how these individuals earn their money here.

Toronto Poker Game is a club that runs No Limit Hold’em (1/3, 2/5, 5/5, 5/10) and Pot-Limit Omaha (1/3) games every Monday, Wednesday, and Friday from 12 PM to 4 AM. Re-entry is available at all tournaments here, and chips can get surrendered at the first break. The club’s location is near Midtown Toronto, on the intersection of Allen Road and Lawrence. More precisely, the property’s address is 526 Lawrence Avenue West in North York. There is nothing flashy about this venue. The tables are high-end, and the player pool is diverse. Both veteran and recreational card gamblers can play here and hope to snag the $30,000 Bad Beat Jackpot, which requires a minimum qualifying hand of AAA/QQ. Currently, this club does not run tournaments.