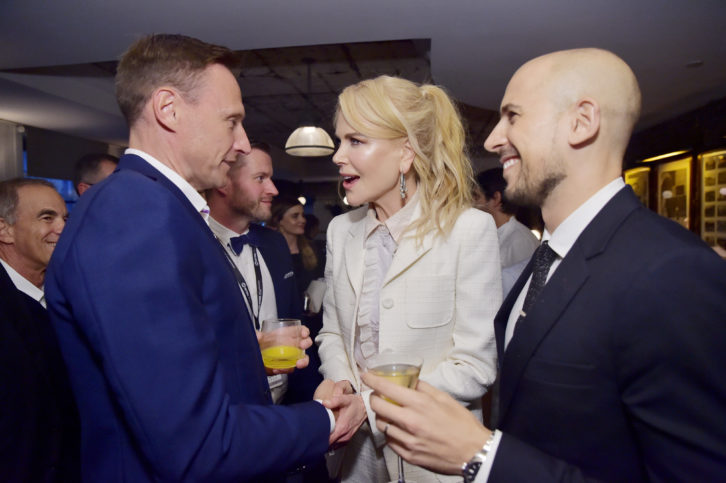 While the Toronto International Film Festival (TIFF) may be one of the world’s most coveted film festivals – with a TIFF film often a precursor to an Academy Award nomination – everyone knows it’s about more than just the films. It’s about the glamour, fashion, and excitement that comes when half of Hollywood descends upon Toronto.

Between rigorous interview schedules, panels, and working that red carpet, Hollywood’s finest like to let loose just like the rest of us do, and the perpetual parties that fill the festival are just as newsworthy as the films are. Every red carpet premiere is celebrated with an intimate cocktail party or cast dinner that remains top secret until after the fact.

As usual, Soho House was filled with star power this TIFF. Not only do the famous faces feel right at home at the members’-only club thanks to Soho House locations in cities like Los Angeles, New York City, Miami, and London, they appreciate the club’s no-camera policy. Plus, the venue is home to the ultra exclusive Grey Goose cast parties and dinners and has been since it opened its Toronto location in 2012. If you’re not on the list, there is zero chance of getting into one of these cocktail-filled celebrations, regardless of whether you’re a member or not. The good news for star-seeking members is that the celebs are often known to stick around once their party wraps, like Jude Law did on Friday, September 7 after the late-afternoon cocktail affair for his film Vox Lux, which also brought co-star Natalie Portman to the spot.

On Monday, September 10, a talent-filled cast dinner for Destroyer took over the second floor of Soho House for a pre-premiere feast, and I got to join. Famous faces like Nicole Kidman and her Golden Globe-winning cast mate, Canada’s “it” girl Tatiana Maslany, sat across from one another at a head table and were in good spirits, chatting it up and laughing with those around them. As usual, Kidman was radiant and beautiful, with her hair up and in a cream-coloured Bottega Veneta power suit that made her impossible to ignore, famous movie star or not. Chef Ludo Lefebvre – who is known as a trailblazer in the pop-up dining scene in Los Angeles – flew in for the occasion, and created a comforting and completely delicious family-style menu that included salmon with a sorrel sauce, market vegetable ratatouille, roasted chicken, and steak au poivre with crispy frites. 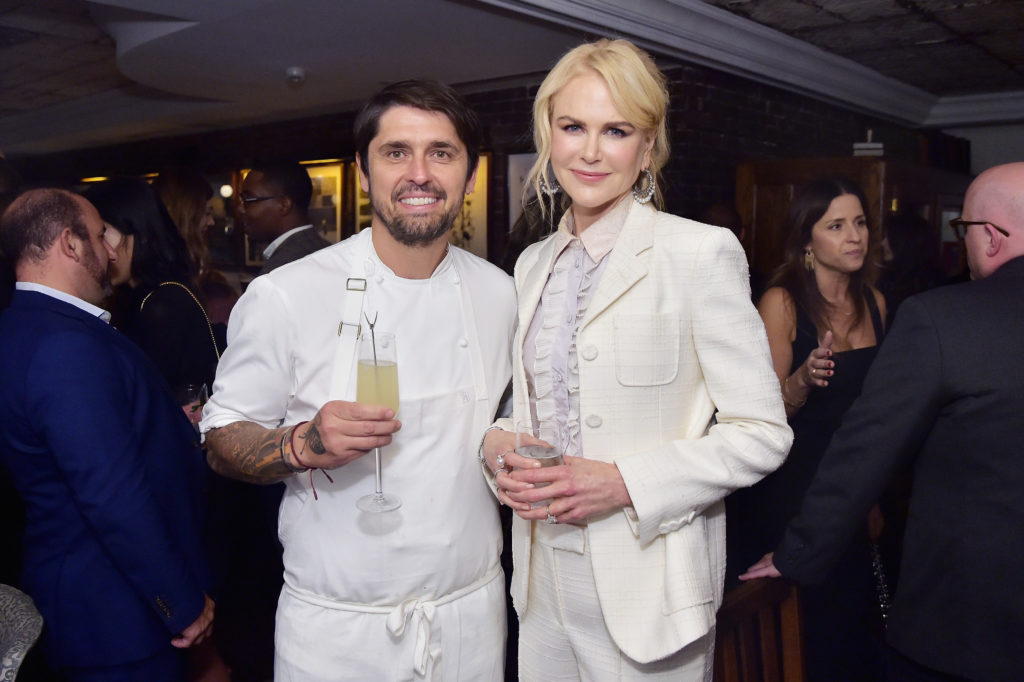 The next night, I was back at Soho House – this time downstairs on the main floor – for the official after-party for Colette with director Wash Westmoreland and stars Keira Knightley, Dominic West, Denise Gough, Jake Graf, and Ray Panthaki. Knightley stunned in Chanel and arrived shortly after the party began, taking a seat on one of the couches by the fire with friends and remaining there for most of the evening before letting loose later on. Meanwhile, Dominic West was mingling and later dancing, especially when Madonna’s “Like a Prayer” came on. Guests enjoyed Grey Goose cocktails and endless passed food, like comforting Korean-fried chicken bites, wood-oven margherita pizzas, and pastel-coloured French macarons.

Filling the walls with more star power, the after-party for The Death and Life of John F. Donovan – a film directed by Canada’s own 29-year-old Xavier Dolan – also took place at Soho House. Joining Dolan in the celebration were members of his cast, including Kit Harington, Thandie Newton, Emily Hampshire, Chris Zylka, and Susan Sarandon. This was one of the hottest ticket after-parties, with other famous faces like Alexander Skarsgard and Paris Hilton stopping by later in the evening. 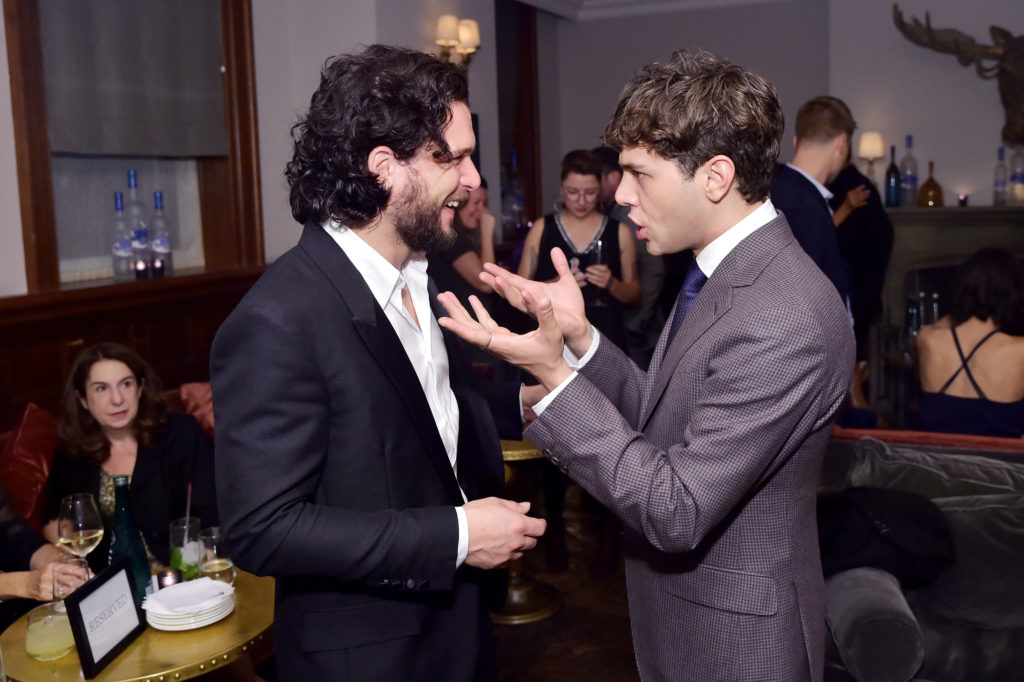 Soho House also hosted Grey Goose celebrations for the films Wildlife and The Front Runner, the latter of which is directed by Jason Reitman and stars Hugh Jackman. Naturally, each party featured a selection of Grey Goose cocktails, like “The Sequel,” an elegant twist on the espresso martini that comes in handy during the late nights; the “Magic Hour,” a cocktail made with Grey Goose L’Orange, orange juice, vanilla syrup, and unsweetened coconut milk; and the “Le Fizz,” a longtime Grey Goose staple made with Grey Goose, St-Germain elderflower liqueur, fresh lime juice and soda.

Just a few blocks from Soho House, another celebrity hotbed this TIFF was RBC House, a pop-up initiative that took over the space at 11 Duncan Street for the second year in a row. In addition to panels, this space also hosted musical performances and A-list cast parties this TIFF. Among them was one of the biggest parties – and one that confirmed one of young Hollywood’s most buzzed-about rumours – the Her Smell cocktail party, which featured high-profile cast members like Elizabeth Moss, Cara Delevinge, Amber Heard, and Ashley Benson. After this high-energy party, there was no doubt that Delevinge and Benson were indeed a couple as speculated, as they affectionately mingled together and enjoyed the evening (they were the last cast members to leave). 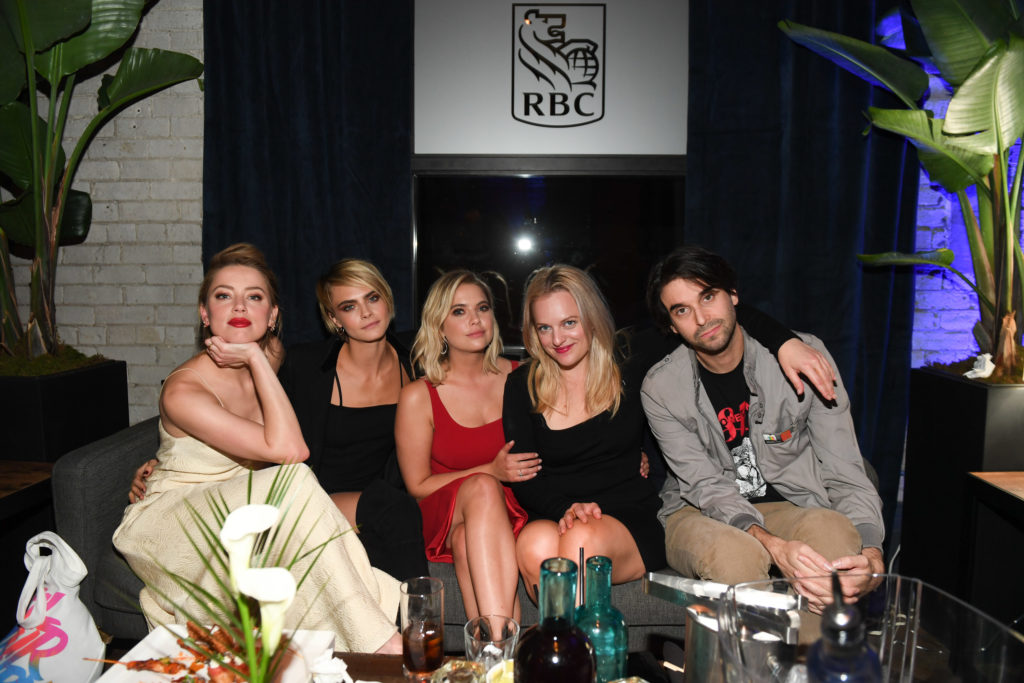 I attended the A Million Little Pieces premiere party – where, sadly, the film’s biggest star Billy Bob Thornton was a no-show (apparently, these types of affairs are not his thing). Party guests included Alexander Skarsgard, who – on the other hand – was clearly making the most of his time to play in Toronto. RBC House also hosted the premiere party for Driven, which brought names like Lee Pace and Jason Sudeikis to the spot. Other Hollywood elite to grace the RBC House for their respective cast parties throughout the festival included Christian Slater, Alec Baldwin, Taylor Schilling, Jenna Malone, Emilio Estevez, Javier Bardem, Penelope Cruz, and Kate Beckinsale, who were all met with flashing cameras and a crowd of onlookers upon arrival.

So, what really goes down at these parties? To be honest, not always a anything too exciting or gossip column-worthy. The parties are typically only a couple of hours long – not long enough for things to go really south – and Hollywood’s finest are usually (keyword: usually) composed and genuinely seem happy to catch up with those they shared the making of the movie with. The stars typically stay in their own booth, with the passed cocktails and platters of upscale casual bites brought to them and constantly replenished. Some years you have some good luck – like the time I stood back-to-back with Matt Damon on the Soho House patio, able to hear every word of his conversation (which, frankly, was all about his kids), or the time that I ran into Javier Bardem and his friend outside of the washroom and chatted love and relationships for what felt like forever.

Other times, you stand awkwardly, knowing nobody, taking it all in and realizing that the faces from the big screen really aren’t too much different from any other super glamorous, genetically blessed, and socially graceful person you know. And they could be right beside you in a bathroom stall.