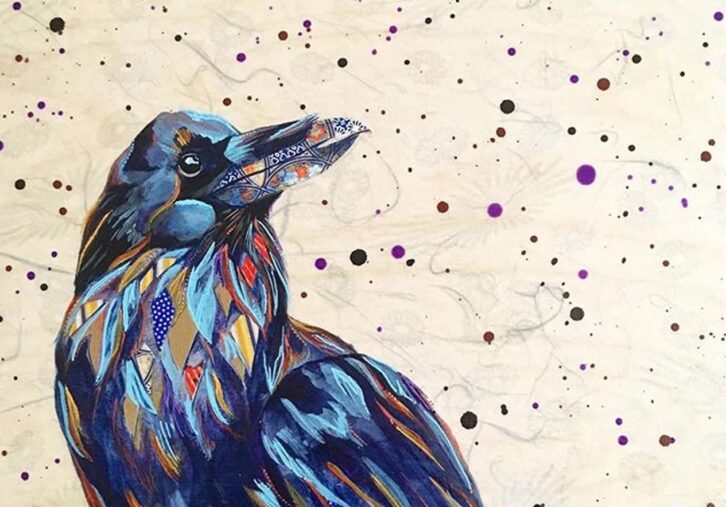 Within Calgary exists a wide range of artists, well known in a variety of fields, from visual art, to photography, dance, theatre, film and more. With such brimming talent and passion, there are projects always on the go that reflect the creativity and inspirational nature of the city. This guide will lead you to the best entertainment for your visit to Calgary, to ensure that you catch all of the art and entertainment from the best of the best of Calgary’s arts culture!

Terra Simieritsch is a Calgary based mixed media artist and teacher. She had spent nearly two decades as a respected environmental expert before she decided to pursue her art. Stemming from her background in environmental science, Simieritsch has a profound appreciation for the wild spaces and species of Alberta, and draws her main inspiration from nature. She works to bring ordinary sights to life, infusing animals, plants, and natural objects with colours and textures, thus bonding realism with the creativity and emotion that flows through her work.

Kenneth Locke is an internationally published creative portrait photographer. Locke is originally from Saskatchewan, however he has practiced his art in Montreal, Ottawa, and Vancouver and has photographed renowned artists that have been on David Letterman, Jimmy Kimmel, Ellen DeGeneres, The Today Show, and more. Locke is predominantly driven by his ability to capture his subjects in a different light than they’ve seen themselves before, as well as to “Explore the process of art by first surrendering, and then getting to a clear place where I can tell you what I did and why I did it.”

Amy Webber a realist painter who was born and raised in Calgary. After realizing her passion for art, Webber first took to landscape photography, finding inspiration in the Rocky Mountains, painting photorealistic landscapes and seascapes using soft pastels and oils. Webber is now transitioning to a focus on portrait painting, incorporating impressionistic brushwork into her pieces. Her paintings are already in private collections all over the world, including Australia, Finland, the United Kingdom, the United States and Canada.

Vanessa Mitchell is a broadway performer who grew up in Calgary and began dancing at 3 years old at the McDonald Wilson Dance academy. At age 17 Mitchell moved to New York City to study musical theatre at the American Musical and Dramatic Academy, and soon was cast in a regional production of 42nd Street as Diane Lorimer (The Gateway Playhouse). She then went on to book a variety of golden age style musicals, including Singing’ In The Rain (Arts Center of Coastal Carolina) and Victor/Victoria (Ogunquit Playhouse). Mitchell has since returned to 42nd Street to perform her first national Broadway tour.

Adam Forward is a Broadway actor who joined the StoryBook Theatre in 2015, and went on to perform in StoryBook productions such as Grease, West Side Story, Seussical the Musical, and Joseph and the Amazing Technicolor Dreamcoat and The Outsiders, where his performance of Johnny won him a Broadway World Regional Award. In addition, Adam has appeared in several TV, Film and Webseries. Most recently, Forward has performed the starring role of Melchior Gabor in StoryBook Theatre‘s Spring Awakening in September of 2020.

EJ Candelaria is a passionate young performer who made his debut playing the starring role of The Man in the Yellow Hat in the StoryBook Theatre production of Curious George: The Golden Meatball. Soon after he went on to perform in The Honest Collective Theatre’s production of The 25th Annual Putnam County Spelling Bee. Most recently, Candelaria performed in the StoryBook Theatre’s filmed production of Annie the Musical in December of 2020. Here, he optimized the new opportunity by exploring the differences between theatre-acting and film-acting as the divisive lines between the two were blurred throughout this project.

Adam Scorgie is a documentary film producer who grew up in Canada before moving to New York City where he studied film at the William Esper Studios in Manhattan. Upon his return to Canada in 2007, Scorgie began production on his first feature documentary, ‘The Union: The Business Behind Getting High’ which was met with tremendous success, having been selected to 33 film festivals, and awarded several best feature documentary awards. In the year following, Scorgie has produced ten feature films, including ‘Inmate #1: The Rise of Danny Trejo’ and ‘The Recount’, a comprehensive tale of the legendary Michael Bisping.

Cheryl Foggo is an award-winning author, playwright, and filmmaker who has focused her work over the last 3 decades on Western Canadians of African descent. In 2015 Foggo directed the short film Kicking Up a Fuss: The Charles Daniels Story which received the Sondra Kelly Award from the Writers Guild of Canada, as well as the 2015 Alberta Literary Award for Drama from the Writers’ Guild of Alberta. Foggo is also a prominent author, having written a variety of novels, most recently released 30th-anniversary edition of Pourin’ Down Rain: A Black Woman Claims Her Place in the Canadian West, the young adult novel One Thing That’s True, and a children’s picture book, Dear Baobab.’

Brendan Hunter is an extremely talented actor, teacher, and producer who exudes passion and fearlessness when Voice Acting in an anime/video games or when performing in front of a live audience. Hunter is most well-known for voice acting many beloved characters such as Tien from Dragon Ball, Hisoka from Hunter x Hunter, and Elecman in Megaman Powered Up. Hunter also possesses the ability to portray a wide range of characters as an actor, with appearances in productions such as Wynonna Earp, Damnation Fargo, Lloyd the Conqueror, Burlesque Assassins, The Reapers, and The PsyBorgs.

Visit the Calgary Guardian to find more actors from Calgary.

How to Find a Safe and Trustworthy Online Casino in Canada
How is 5G Performing in Toronto?