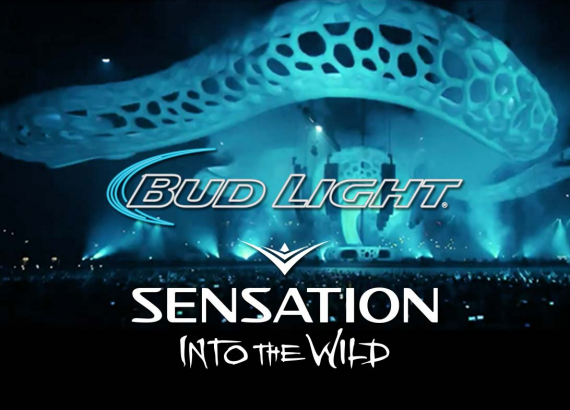 The return of Bud Light Sensation: “Into the Wild”

The worldwide musical and visual mega-attraction, Bud Light Sensation starts in Dubai in October 31st, 2014 (for their first outdoor Sensation). Then not too long after that Sensation comes to Toronto at the Rogers Centre, promising to once again bring together 30,000 people all dressed in white.

The light shows and pyrotechnics will set the stage for a jungle theme of “Into the Wild”: where it’s all about “releasing your inner animal and [drawing comparisons] between modern day nightlife and the universal laws of the animal kingdom.”

While the DJ lineup is still to be finalized, you can be sure there will be top notch headliners as well as Sensation’s “Mr. White”. In the last Sensation 2013, DJs included 2000 and one, Sunnery James & Ryan Marciano, Fedde le Grand, Eric Prydz and Otto Knows.

Here’s a quick 13-second Sensation “Into the Wild” teaser video for Toronto.

So even though it takes place in Toronto in November 29th, 2014, “club member” early bird tickets are available online here now until May 20th. The password is “Sensation”.

After that, the Public regular ticket sale starts on Wednesday, May 21st at 10am EDT through Ticketmaster www.ticketmaster.ca and www.sensation.com or by calling 1-855-985-5000. It’s sure to be a massive party you won’t want to miss.

Also, here’s the video from Sensation 2013

We can’t wait to premier our very first outdoor Sensation show ever in Dubai! http://t.co/AzkoF8lDqB pic.twitter.com/Iqji6uKRI7

When it comes to going wild, there is no place like Russia. Expect nothing but the best! pic.twitter.com/tSO0uyL4eO