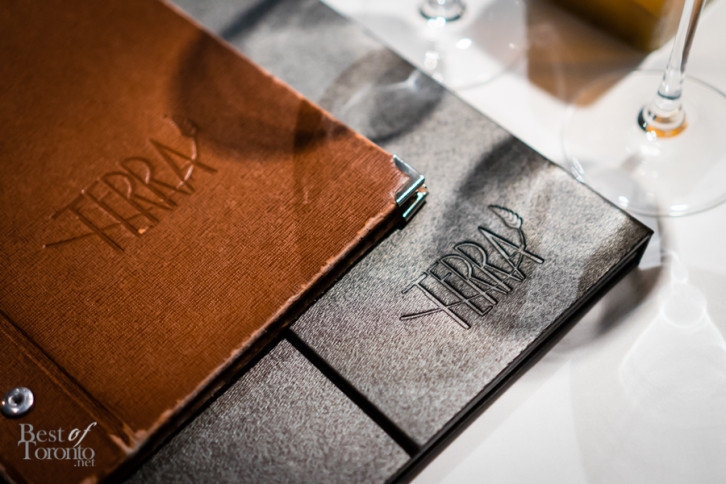 It’s not often that we get to venture out of the city’s downtown core to visit a restaurant, but when we do it’s always something to look forward to. This time, we were off to Thornhill, north of Toronto, to visit Terra Restaurant, celebrating its milestone 20th anniversary this October. Terra is part of the Substance Food Group‘s family of restaurants, which also includes Sarpa in Oak Ridges, Rusty’s at Blue in Blue Mountain, and Francobollo in North York.

We began our meal with some drinks. I had a martini called the Tweety Bird (Not Yellow) ($16, 2.5 oz), which consisted of Belvedere Vodka, sour raspberry, melon liqueur, blue curaçao, and cranberry juice. This came in a shaker, and was poured expertly at our table. It had beautiful shades of purple (hence the “not yellow” part of the name), and gravitated more towards the sweet side. My guest had a glass of 2014 Dawson Creek Cabernet Sauvignon from California ($15, 6 oz), one of four reds offered by the glass. If you want to order by the bottle, your selection of wine grows extensively. 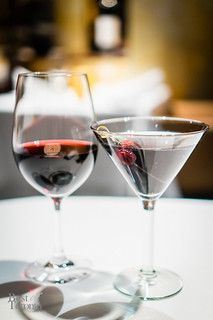 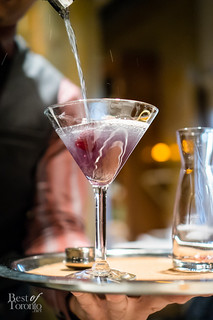 
After taking a sip of our drinks, we were ready to eat. It was a tough choice from the available appetizers, with enticing dishes like bison carpaccio, and duck confit spring rolls, but eventually we settled on the two that struck us initially. The first was grilled day-boat scallops and crispy pork belly ($20). The scallops were perfectly cooked, with beautifully precise grill marks, and the pork belly was nicely crisped. The pommery mustard cream, along with the corn, roasted sweet pepper, and pea succotash complemented both the scallops and the pork. The other appetizer we chose was the seared Quebec Grade A foie gras ($29). This too was delicious. The sultana raisins cut through the richness of the foie gras, while almonds provided a counterpoint to the soft, melt-in-your-mouth texture. 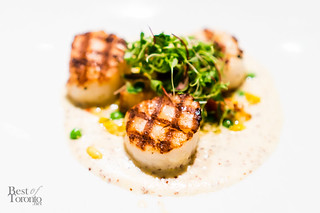 
The quality of the appetizers made us eagerly anticipate our entrees, but before that we were served an intermezzo – some lemon sorbet to cleanse the palette.  For the mains, we ordered the Australian rack of lamb ($49), and the seafood spaghettini aglio olio ($39).  The lamb is one of the best I’ve ever had.  It was cooked to just the right medium temperature, and the honey-mustard pistachio crust did not overpower the flavour of the lamb.  The seafood spaghettini was simple but extremely well made.  The spaghettini was sautéed in just garlic and olive oil, allowing the seafood components to shine through.  There were mussels, prawns, king crab legs, scallops and a lobster tail, all cooked perfectly. Other mains available include grilled ostrich, a veal porterhouse, and premium quality steaks, to name a few. 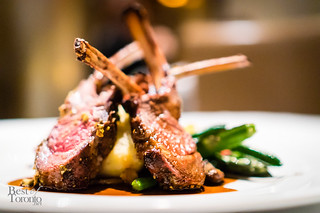 
We were quite satiated at this point, but we couldn’t resist ordering dessert. We chose the strawberry and rhubarb tarte ($14), and the classic crème brûlée ($13). The sweetness of the tarte’s filling, which was vanilla bean mascarpone, balanced well with the tartness of the strawberry and rhubarb. It reminded me of a very light, and very delicate cheesecake. As for the crème brûlée, I’ve had many in the past, but none have been as silky or smooth as Terra’s. Again, it had just the right amount of sweetness, and the top was evenly brûléed. With our desserts we also had some tea, charmingly served in clay pots, and accompanied by an hourglass timer to let you know when your tea has steeped enough. The menu of coffees, teas, and digestifs is also quite impressive. 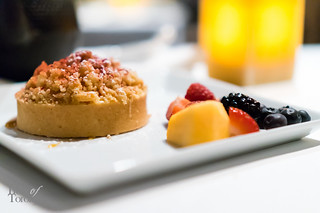 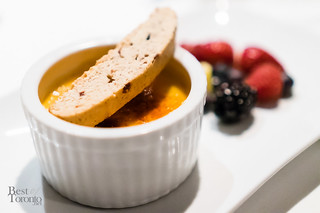 
The dishes we had tonight were classic dishes, done extremely well. It was hard to find a flaw – everything was perfectly cooked, and no components were out of place. Executive Chef Stephen Perrin and his staff obviously take pride in their kitchen. The service too was impeccable – our waiter was polite and friendly, and gladly offered suggestions when requested. With food and service like this, it’s no wonder that Terra has lasted 20 years – a rarity these days. Terra positions itself as a fine dining establishment “north of the core” and is well worth the visit. On Sundays, Terra also offers a Sunday’licious’ dinner menu, available from 5 pm on Sundays. For $39 per person, excluding taxes and gratuity, you can get an appetizer, main, and dessert. Some of the more expensive options on the regular dinner menu are also available for a nominal charge, with prices indicated.

Terra Restaurant is located at 8199 Yonge St. in Thornhill. For more information: 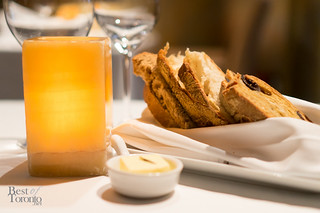 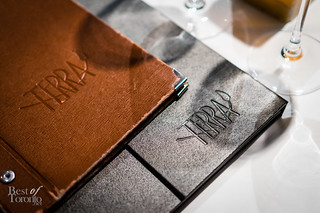 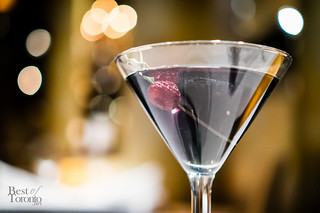 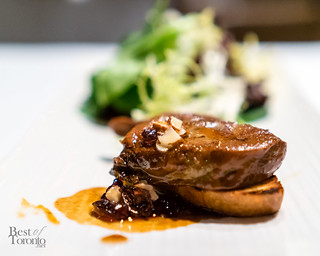 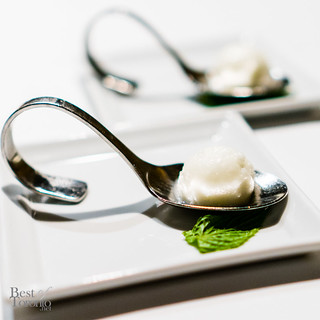 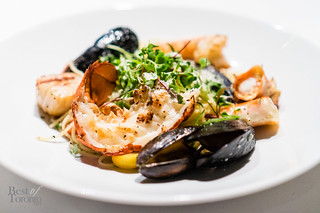 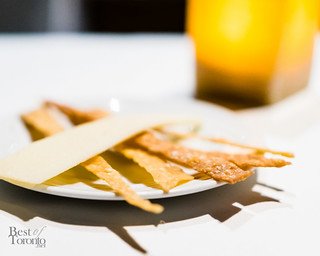 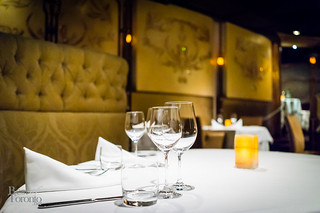