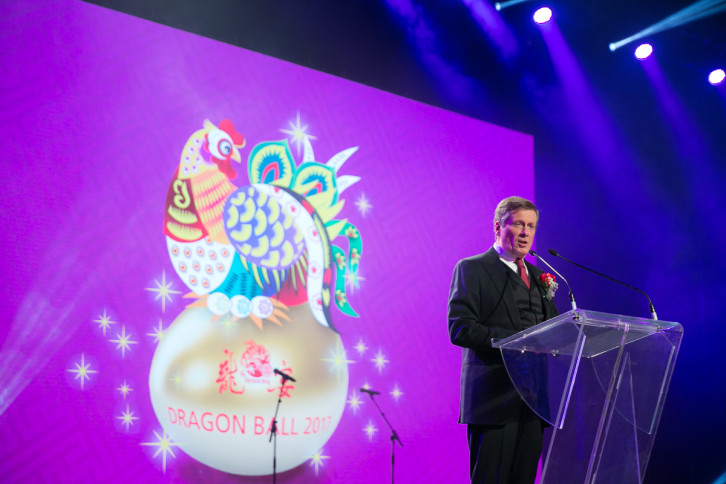 Interview: John Tory Says We Must Work to Maintain Our Embrace of Diversity

We caught up with the Mayor of Toronto at last weekend’s Dragon Ball in the city we (thankfully) call home. The annual Dragon Ball is one of the most anticipated Chinese New Year celebrations in Canada, uniting 1,000 guests – including leading politicians, representatives from the business sector and community leaders – in both celebration and support of the Yee Hong Community Wellness Foundation.

First and foremost, Mayor John Tory says that “The excellence of Yee Hong” – an assisted living centre for seniors – is what brought him out for the occasion. He also chatted Toronto pride, the beloved Toronto Island, and why we can’t lose sight of our culturally inclusive roots.

What brings you to Dragon Ball year after year?
“I first went into Yee Hong in about 2003, and I thought I was in a fancy condo development. This is truly quality long-term care for some of our elderly citizens – and it’s the best I’ve ever seen. It’s not just the building, but it’s the quality of care and the embracing of diversity. I remember, I went in there and saw not only a beautiful looking place, but there was a hair salon, a gym and a bustling room where people were playing cards, and I thought to myself, what kind of a great place is this? I’ve gone back a few times to remind myself of how terrific it is and the quality of care we should be offering all of our elderly. Unfortunately, this isn’t always the case.”

What are you most proud of about Toronto?
“I am most proud of Toronto – I think I always have been and I think we always will be – at the way we live together here. It’s a really remarkable thing. When I mention to people in other cities of the world in my travels that 51 per cent of the people who live here were born in another country, they marvel at that. They marvel in that – not only are we the most diverse city in the word – we don’t just live together, we get along, we celebrate each other and thrive on our differences. This is something people around the world notice and know about Toronto; they admire it, and it’s different than the type of narrative we see in other parts of the world, where people are at each other and afraid of each other. Over here, we celebrate one another. That’s what I am most proud of. That’s what we need to make sure remains the same.”

With everything happening south of the border, do you feel that there’s an even greater need to perpetuate that?
“I mention in my recent remarks; all around the world, we see this polarization going on of people singling each other out and saying ‘Oh, I don’t like those people; I don’t trust them. I don’t know them; I don’t like what they’re about.’ Here in Canada, it’s almost the opposite. We want to learn about the people who are coming here who are different and new…we want to learn their stories.

We welcome refugees here to escape the unspeakable horrors in the country that they live in and we need to keep an eye on what’s happening in other parts of the world to remind ourselves that we’re successful because we avoided that. We’ve always embraced people, and learned about them. If we don’t know much about them, we go and we find out, as opposed to immediately saying ‘I don’t like them.’ We don’t single them out because we don’t like them. I think that’s really an important part about living here.”

Do you have a favourite, nostalgic Toronto spot?
“There is nothing that quite replicates the experience of going to the Toronto Island. You can head downtown to the start of the longest street in the world – and the main street of Toronto – and get on this boat. It’s not a very long boat ride, but as a kid, it’s the best thing you’ve ever done. Then you get there to this marvellous place – and there’s all this green space, a little amusement park, a full neighbourhood. I just think that, as long as you live in Toronto – and I’ve lived my whole life, 62 years, here – that you can never help but get excited about getting on the boat to the island. Even now, I get excited about it.

I take my grandchildren. You stand there on the island, so close to the city, and stare back at this huge dynamic city and you can’t help but think, how can I be so close to a huge city, but not hear anything and feel like I’m in the middle of nowhere? That’s a special place, and it’s always surprising the number of Torontonians who have never been there.”

What are you excited for in 2017 for Toronto?
“I think what’s great in Toronto is that we will be celebrating the 150th birthday of Canada. We are a modest people, us Canadians. We’re not perfect, but we don’t realize how good we have it here. I think to celebrate an anniversary in your country is an opportunity to reflect upon some of the things we’ve been talking about, and on how lucky we are and how you have to work to preserve that. You can slide into the sort of pit that other countries are falling into quite easily, and I think the 150 anniversary will give us a reason to make sure we don’t do that.”