The entertainment acts lined up for this year’s Pink Party are looking pretty good! This annual not-for-profit charity event just keeps getting better and better.

It all started as a small backyard party back in 2010 hosted by Paul Etherington to 80 friends in pink in support of breast cancer. He’s the same man behind the nation-wide non-profit Motionball charity gala which has raised millions for the Special Olympics Canada Foundation.

Now in it’s 5th year it should be another sold-out soiree hosted once again at the Castlefield (formerly known as the Capitol Event Theatre) at Yonge north of Eglinton. It’s a great wide-open venue space perfect for an evening with 1,000 charitable partygoers in all pink everything.

Special guest hostess of the night is the one and only actress, Kristin Kreuk!

Headlining musical acts include The Sheepdogs and Naughty by Nature. Very impressive!

So get your tickets now before it’s sold out and see you on April 11th!

Check out our photos from last year’s Pink Party 2013: 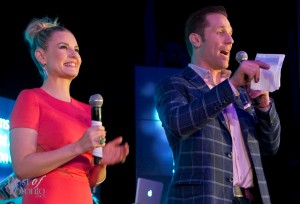