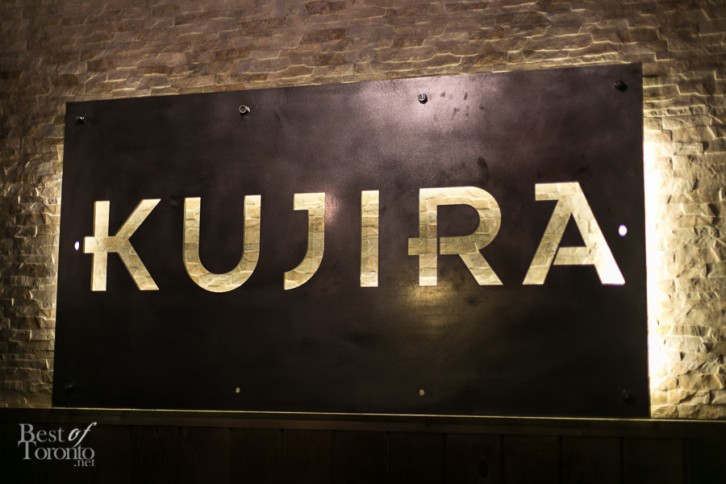 Kujira Japanese Cuisine opened its doors in Yorkville just before the Labour Day weekend. On Friday, October 10, we finally had the chance to visit to discover what Kujira promises – a harmonious fusion of authentic Eastern flavours with Western modern flair.

** UPDATE: Regretfully, it seems that Kujira is now closed **

Walking towards Kujira, you first pass by its patio area, which can seat about twenty people. It’s a shame we were only able to come in October, as it would have been great to sit outside in warmer weather. You enter through the doors and you notice the large modern metallic signage, and further in, the iron light fixtures with incandescent bulbs. All of this is juxtaposed with warm woods everywhere – from the tables to the seating, and even the panels on the wall. This produced an ambience that was welcoming, casual, and cozy. 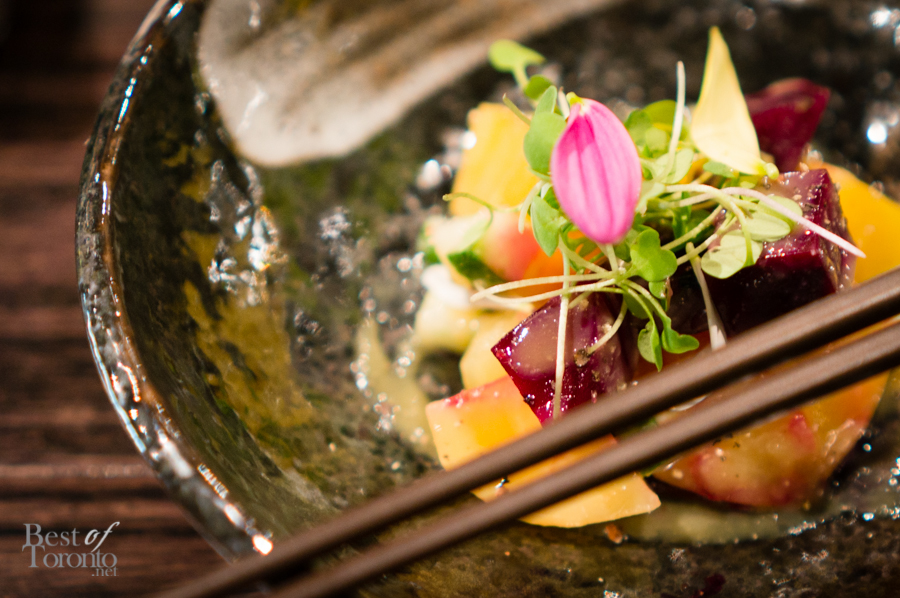 For the salad, we had the beet salad with miso mustard sauce. I enjoyed the crunch of the beets, and the tartness provided by the miso mustard. From the soups we tried the Kujira signature miso soup and the Ankake udon with grilled shrimp. The miso soup had a strong, sharp flavour from the miso, but also had a hint of sweetness, which was very nice. As for the udon, the noodles were the perfect firmness, and the broth tickled your palate. 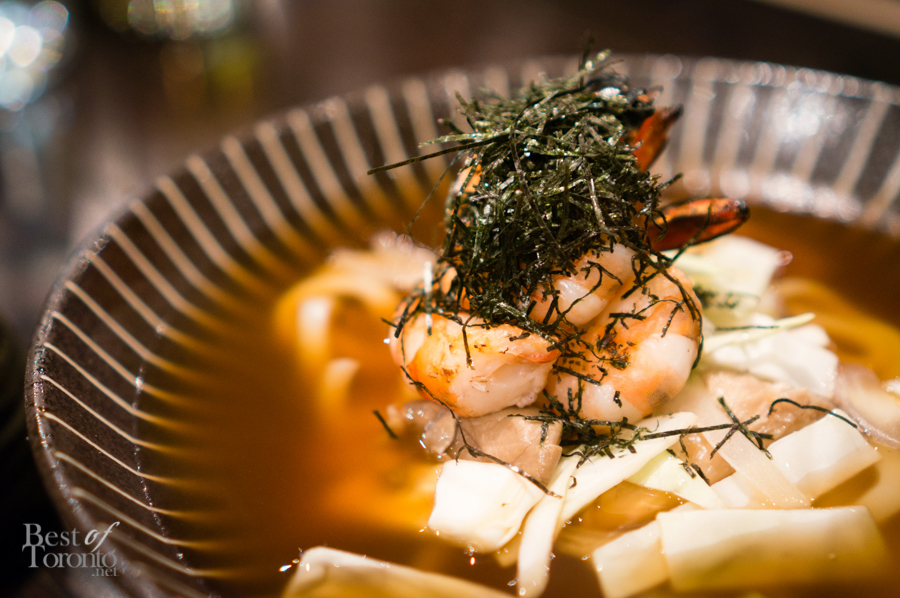 What we were most looking forward to though was the tapas, and we were not disappointed. The albacore tuna paté with deep black sesame wonton skins came first. The wontons were crisp and light, and a great complement to the texture and flavour of the paté. The deep fried tiger shrimp tossed in chilli mayonnaise was one of my favourite dishes of the night. It’s the deep fried shrimp that you expect, but combined with the chilli mayonnaise the subtle heat turns this dish into something entirely new and addictive. Order more than one of these if you’re dining with a lot friends. 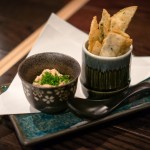 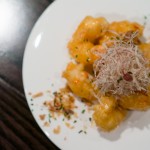 We tried a few other tapas, including the braised beef short rib, which was fall-off-the-bone tender and very flavourful, the pan fried black cod, which was soft and cooked just right, and the curry marinated chicken karaage, whose curry flavour really shone through while balancing well with the mint mayo. In all of these dishes, the east meets west theme was very evident in the unexpected western twists on eastern classics, or vice versa. The flavour combinations worked and were memorable. 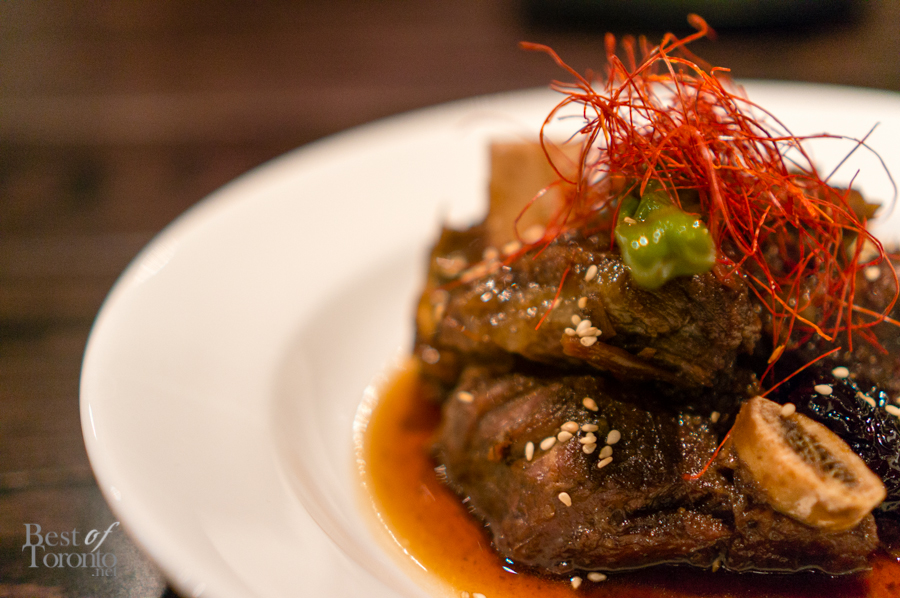 With all the great tapas, the highlights of the night though were definitely the seafood. The torched mackerel sashimi was delicious and expertly prepared and presented, especially considering how difficult it is to debone this particular fish. The sashimi sets included a variety of different fish. The pieces were of a good size and extremely fresh. The sushi set had a variety of unique garnishes, including garlic black olive, arugula pesto, and jalapeño. Each piece was great just on its own, and should be tasted without wasabi or soy sauce to really appreciate the flavours. Finally, there was grilled ika (ie. squid) which was also delicious. Note, this item is not on the menu as it was the special of the week. Chef Kevin Hyunki creates new items weekly, based on the seasonality and the freshness of available ingredients, thus upholding Japanese culinary traditions. 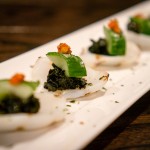 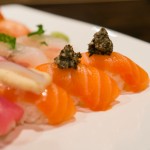 Throughout the meal, the drinks were flowing. There is a good selection of cocktails, sake, and beer, including frozen beer. Pitchers of draught beer are also on special during certain hours. Kujira is a great place to hang out with friends after work till the late hours, where you can munch on delicious, shareable tapas that pair well with all the drinks that you’ll order. It’s like an izakaya, but the main focus is food. Definitely head on over to Yorkville and check Kujira out. 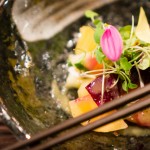 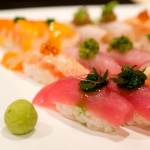 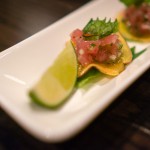 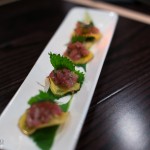 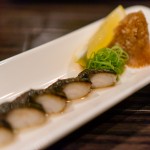 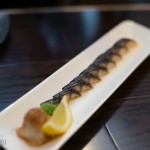 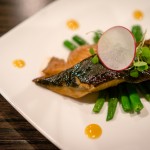 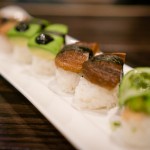 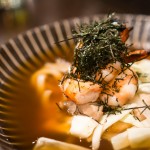 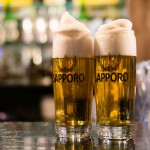 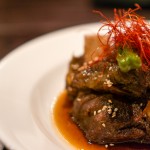 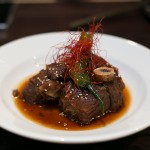 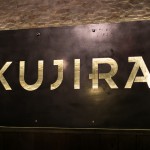