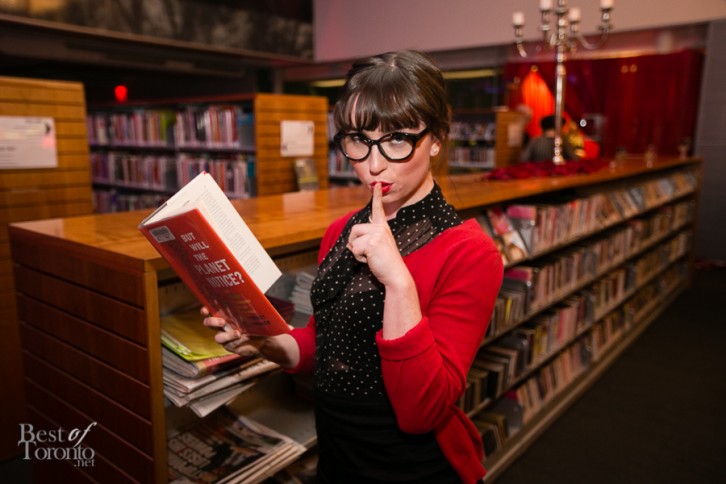 Upcoming: Party In The Stacks at Hush Hush for the Toronto Public Library Foundation

If you’re like me, the notion of “partying in a library” may conjure up images of bespectacled literary inclined bookworms and their cohorts gathered around in a tight circle to discuss Chaucer while snacking on Cheetos. Well, that perception was forever shattered when we attended the inaugural Hush Hush Party, which was one of the best events we attended last year.

The Party in the Stacks At Hush Hush, hosted by New Collection, returns for its 2nd year at the Bloor Gladstone Branch, a beautiful historical library with a new modern glass-box addition. The Speakeasy themed event features a secret cocktail bar accessible only by password, catered delectable bites from Rock Lobster, live jazz band and DJ, amazing prizes, open bar, performances, and prohibition themed surprises. There’s a complicit joy in partying where you’re usually not supposed to. Hush Hush is unique in the sense that it turns a place of learning into an elegant space for revelry. All proceeds from this event benefits the Toronto Public Library Foundation (TPLF). Get your tickets here and don’t forget your fedoras and bow-ties: http://hush-hush.ca/.

New Collection is the TPLF’s young patron group that provides members with exclusive access to events featuring prominent writers, artists and intellectuals such as Douglas Coupland, Kelly Oxford, Irvine Welsh, Jeanne Beker, and Justin Trudeau to name a few. As one of the world’s busiest urban public library systems, over 19 million people visit Toronto Public Library and borrow over 32 million items each year. The Foundation needs donors to help ensure that resources, program, and services offered by the library continues to serve over 72% of Torontonians who actively uses the library.

For more information on the New Collection, click here: http://tplfoundation.ca/new-collection/

Also check out our photos from the inaugural Hush Hush 2013.

At the UnGala 2014 for Save a Child's Heart
In Photos: The "Laughter is the Best Medicine" Gala with Chris Rock