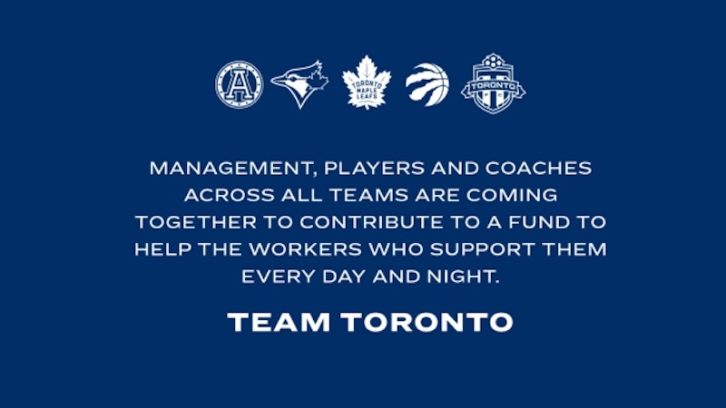 The major sport organizations in Toronto have come together in order to help those in need and those most affected by the Coronavirus outbreak. Due to the virus, all major sport has been cancelled, so not only can you not watch it, but you also can’t bet on it. This has had major affect on different Canadian sportsbooks offering a range of sporting markets to bet on.

The Sport organizations have but together something called the “Team Toronto Fund”, which was launched on Sunday. The teams involved include the Raptors, Toronto FC, Blue Jays, Maple Leaf and Argonauts. The funds will go to event staff who are losing out on work and money by the major sporting events being cancelled. This will help all people involved within the stadium who would typically be working when a sporting event is being played in an arena.

There will be a lot of workers that will benefit from this extra assistance and therefore it is a very beneficial organization to have in place. It is also a great way to show appreciation to the workers, who will feel included and appreciated when receiving this funding, instead of thinking that they are forgotten about and having to go into a state of struggle in order to fund their lives.

The management of each team, the players and the coaching staff will all put in their contributions in order to help these people. Due to the Covid-19 pandemic, the NHL, NBA, MLB, AHL and CFL are all put on hold for the time being. There is no real indication as to when they will all be back up and running and that is another worrying factor for the staff, they cant confirm when they will receive a full payslip again and this can seriously but them on the back foot, making them struggle to even survive or feed their families.

All of the sports teams are put through testing to see whether they have contracted the Virus. Across the US, there are a lot of players in the sporting world that have in fact tested positive for the virus, it shows that no one is really safe from the virus and we all need to consider the health warnings that are issued to us and follow the strict rules put in place.

We are hoping that sports will be back up and running as soon as possible. Over in the UK, the major football leagues have been frozen until the beginning of April, it is still yet to be confirmed whether or not the games will go ahead then or whether the break will be extended even longer.

The Team Toronto organization also allows people to see how we can all come together, help communities and those in need, so that no one is badly affected by the outbreak and we can all go through it together. All the players have quarantined themselves to be cleared of the virus. Even after this there is no confirming that events will be back up and running. One suggestion is to continue playing the remaining fixtures but do it behind closed doors. This is not beneficial for fans who want to be able to watch their team play and sports are not the same without the fans, they play a major part in the entertainment of it all.

The Great Rogers Cup Rivalry - Toronto vs Montreal
How Will Virtual Reality be Used in the Fitness Industry?