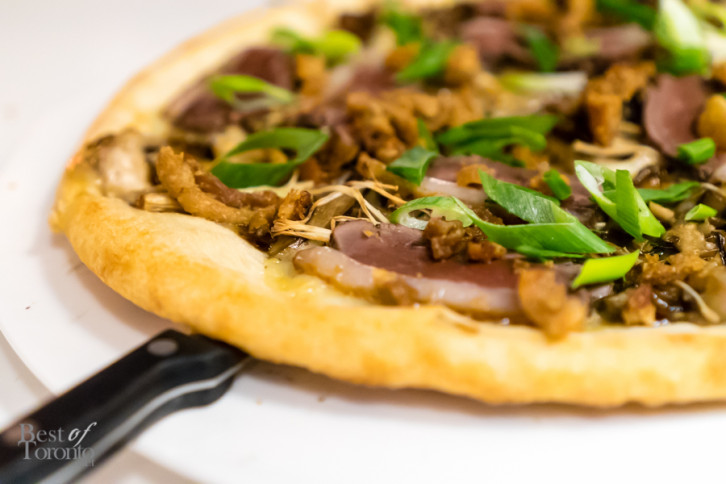 Italian restaurant The Red Tomato has been a fixture in the King West theatre district since 1988, along with sister restaurant, Fred’s Not Here. Now, in 2015, the restaurant aims to reinvent itself with a new menu focused on an Italian favourite – pizzas. On September 23rd, we visited to sample the new offerings.

The selection of pizzas was divided into three categories: red, white, and the playfully named “fusion confusion”. We decided to try one pizza from each. From the red pizzas, we had the aptly named “The Hangover Cure”. It consisted of tomato, olives, soppressata, double smoked bacon, fresh mozzarella, grand padano, chilies, and topped with a fried egg. This was a delicious pizza – bacon, chilies, and egg – how can you go wrong?  And it actually is the perfect pizza after a night out on the town. 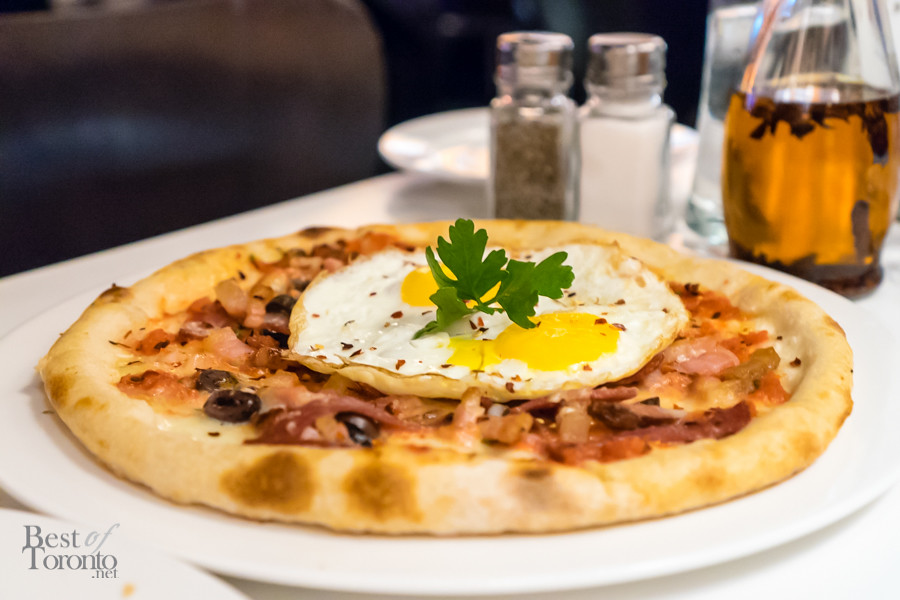 From the white pizzas, we had the Pork Belly pizza. It had slow roasted pork belly, roasted sweet balsamic onions, fresh mozzarella, and balsamic tossed radicchio. I am generally not partial to white pizzas and this one did not change my mind. The pork belly perhaps needed a tad more seasoning, and the natural bitterness of radicchio didn’t quite harmonize with the rest of the components.  Perhaps one of the other white pizzas, like the mushroom pizza (which has truffle oil), or the garlic shrimp pizza (with walnut pesto) will convince me next time. 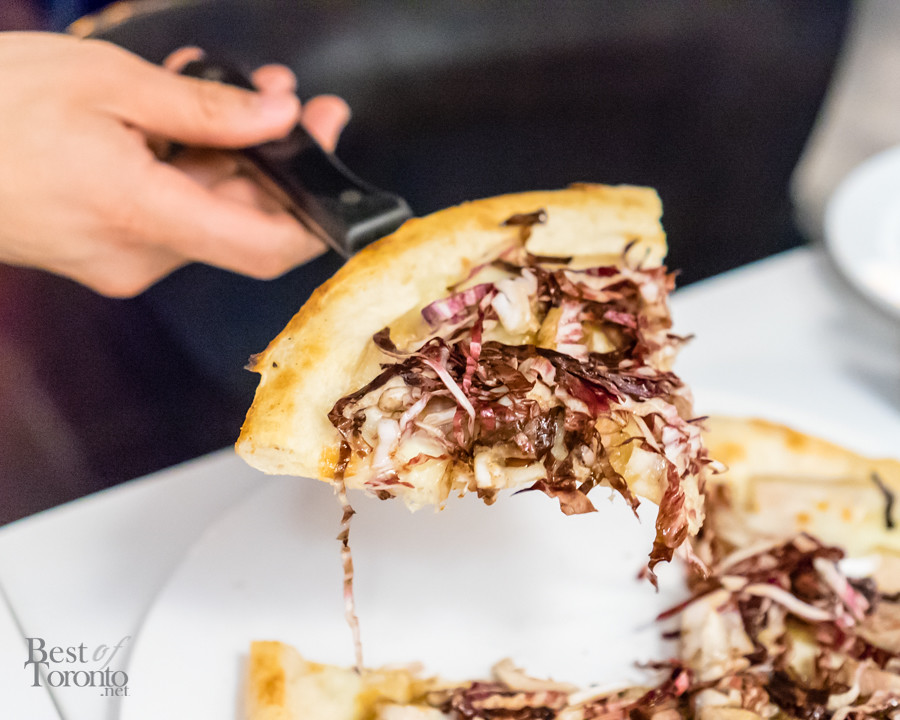 Speaking of favourites, the peking duck pizza (top image) from the fusion confusion category was definitely a winner. Roasted duck breast, enoki and shitaki mushrooms, fresh mozzarella, hoisin drizzle, green onions, and crispy duck cracklings comprise the ingredients. If you’ve ever had a peking duck dinner, this pizza replicates those flavours authentically – the savouriness of the duck, the sweetness of the hoisin sauce, and the slight bitterness of the green onions. The addition of the cracklings provided a nice texture surprise. It’s essentially a Peking duck dinner on a pizza crust. It’s a definite must try.

All of the pizzas are 11″ in size. The crusts were light and airy. The only thing I would change is to make them slightly crispier. Overall, I enjoyed the three pizzas we sampled, and definitely would like to try the other choices in the future. Now is actually a perfect time to visit The Red Tomato, as there’s currently a 2 friends + 2 pizzas + bottle of wine promotion until November 30th. From 4-10pm on Sunday and Monday, and 7-11pm the rest of the week, two people can enjoy two pizzas and a bottle of Italian wine for only $39.99. Considering the eight pizzas available for this promotion range in price from $13-$16 separately, this is definitely a great deal, and not one to miss.

Along with the pizzas, we also tried some other items on the menu. From the starters, we had the crispy coconut shrimp with thai dipping sauce ($8), and fried & smoked (jerk) chicken wings ($8). From the pastas, we had the garlic shrimp angel hair pasta marinara ($16), which I thought was quite good. The shrimps were cooked well, the pasta had the right firmness, and the marinara sauce had just the right amount of acidity, though I thought the frisée for garnish was not necessary. And finally from the desserts we had coffee creme brûlée and the chocolate mousse; the latter of which would be my choice between the two. The mousse was delicate and rich, and not overly sweet. 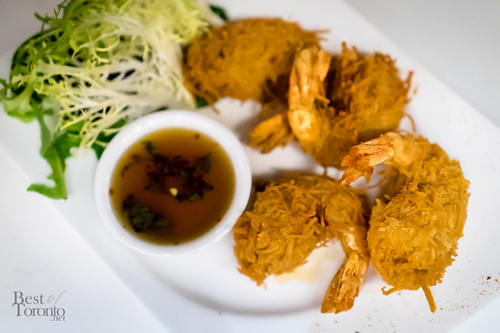 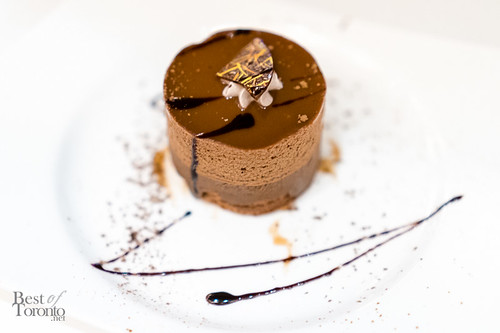 The Red Tomato is located at 321 King St. W, a few doors west of John St.  For more information: 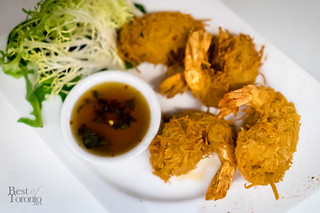 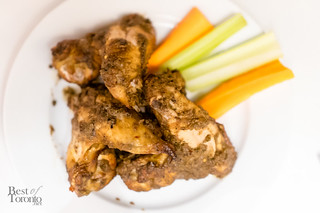 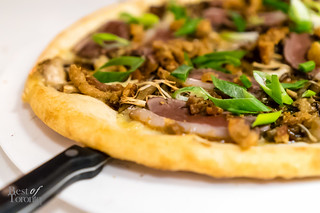 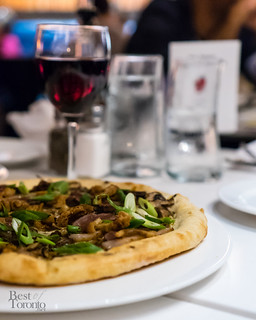 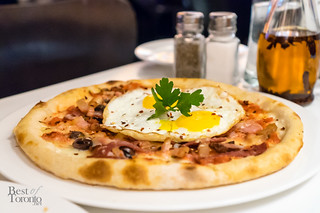 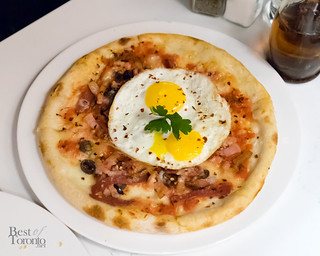 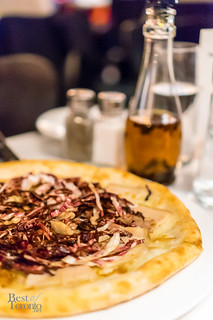 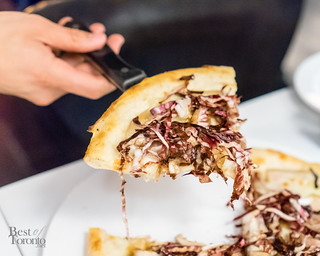 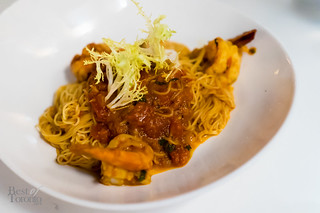 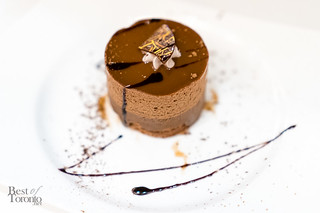 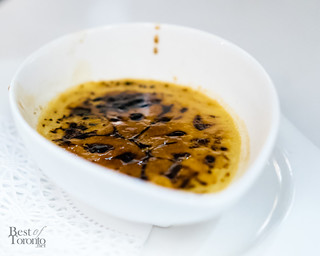