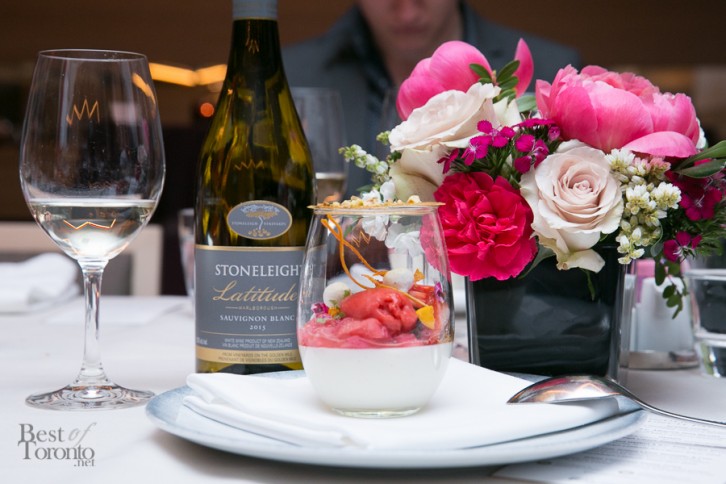 A taste of Stoneleigh Wines at Bymark Restaurant

It was rather surreal to be sitting down for lunch with an influential figure in Toronto’s culinary scene– but it happened. If anything, it just reinforces the notion that this person — Chef Mark McEwan — is a very down-to- earth individual.

At Bymark restaurant, in the bustling financial district of Toronto, we tasted a marriage of Canadian food with wine from New Zealand. It was a deliberate showcase seasonal ingredients and wines that complement the flavours in each dish.

The scallops were buttery-rich and creamy; they reacted well to a sip of the effervescently light Stoneleigh Classic Sauvignon Blanc 2015. Drinking the semi-dry wine helped to cleanse the palate without leaving a residual weightiness. It is an ideal sipping wine for seafood that carries density and richness on the tongue.

As well, the aromatic fruitiness in this Sauv Blanc helped to counteract and balance out the second passed canape, the BC Albacore Tuna Nicoise– especially with one of the components that had a high amount acidity and tang; the wine helped to soften the harshness of the anchovy dressing.

As for the last canape, it was a delightful echo of the fruit sweetness found in the wine with the use of delicately sweet rhubarb pearls that were placed on top of raw oysters.

We navigated through the rest of the meal with our guides, Chef Mark McEwan and Jim Robertson, Global Wine Ambassador for Stoneleigh. 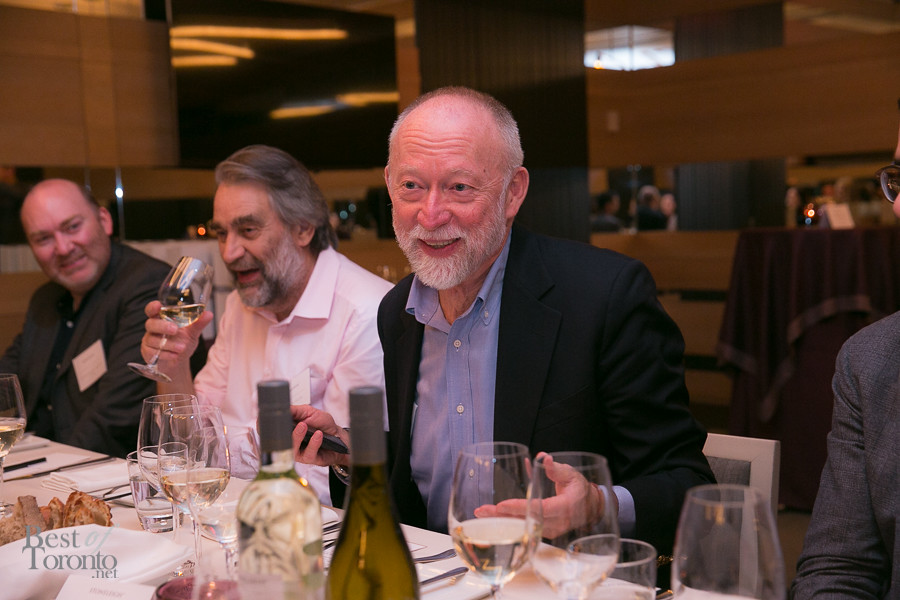 There were many thoughtful touches throughout our multi-meal luncheon. The tone of many plates were that of welcoming in the spring harvest. As Chef Mark explained, “Everything is supposed to taste light, fresh, and bright”.

Our first plate reflected this philosophy– Pan roasted Halibut and BC Side Stripe Shrimp. Many of these components had umami flavour notes accentuated with sweet pea puree, fava beans, buttery morels, and shrimp bisque. The meaty and flaky halibut was given a textural lift with the next paired wine– the Stoneleigh Latitude Sauvignon Blanc, 2015. With a sunshine hue, it carried a delicate fizz on the tongue and slight minerality. The grapes that are grown in this area are called the Golden Mile, which is a strip of land covered with river stones. The effect this has had on growing conditions have been invaluable. They result in what Jim describes as “Wines that are aromatically lifted and riper in spectrum”. 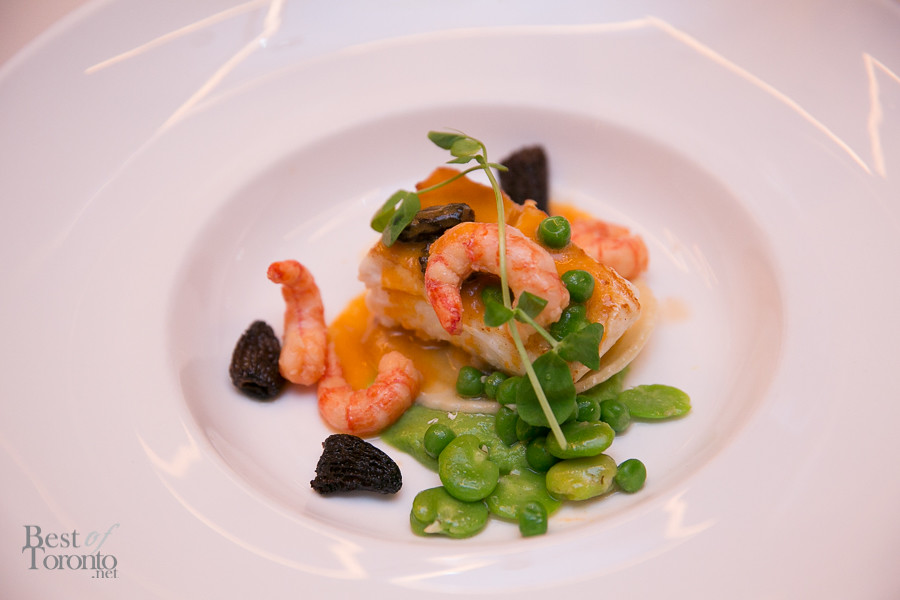 Pan roasted Halibut and BC Side Stripe Shrimp

For our mains, we received a duo of lamb: Sous Vide Grilled Shoulder and loin. The loin was soft with a creamy pink flesh– akin to the texture of a filet mignon, and the Grilled Lamb shoulder had an earthy flavour with a slight gaminess and a tender chew. While both were starkly different in flavour and texture, they both complemented the deep, ruby hued Stoneleigh Latitude Pinot Noir, 2014. The fruity/jammy nature and slight oakiness was a terrific counterpoint to the rich flavour of the meat. Definitely, it was a harmonic pairing; there was just enough acidity to bridge the flavour notes of the food with the wine together. As well, the wine’s fine grained tannins and savouriness played off the meatiness of the protein perfectly. 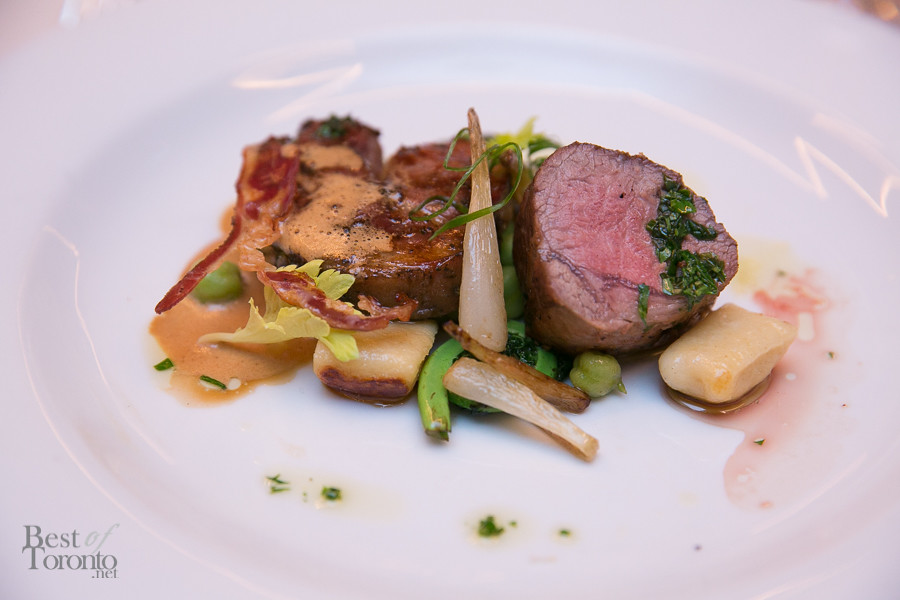 A duo of lamb Sous Vide Grilled Shoulder and loin

If you haven’t tried Stoneleigh wines before, any of these three varietals make for food-friendly wines.Whether you opt for a tasting at Bymark with one of their seasoned sommeliers to guide you, or want to create something inspired by Chef’s dishes, you cannot go wrong with any of these reds and whites. There’s backbone and structure in each of these wines to offer you unique personalities, but not to the point where they overwhelm and compete with the food you’re serving. 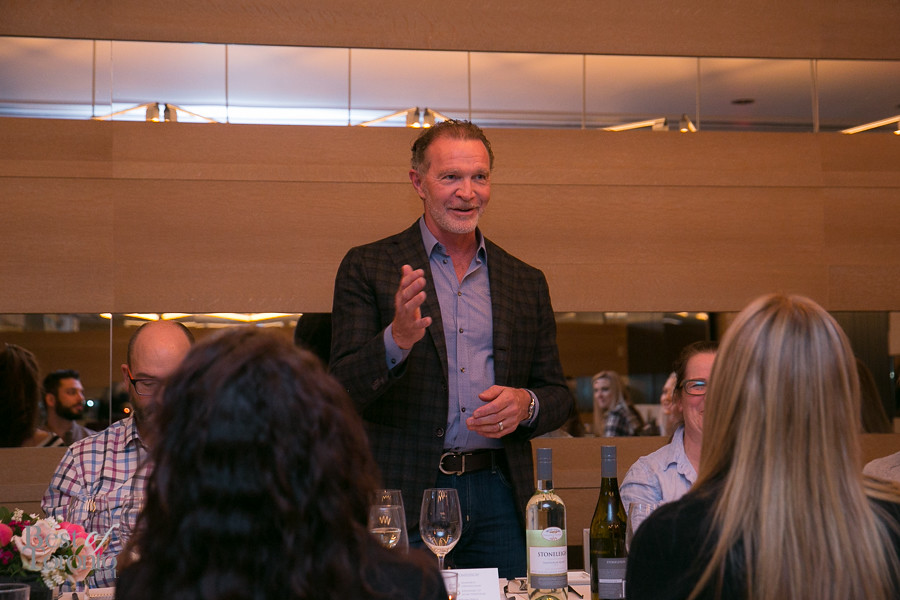